It’s a shell of what it used to be.

The wood is splintered. The metal is rusted. And the front porch is bare. Pieces of plywood, painted black, cover windows and doors, signaling to passersby that it’s been empty for years.

This shotgun home, and the thousands like it scattered throughout Jacksonville, may seem irrelevant yet historians contend it’s a dwelling with roots that run deep in Duval County. 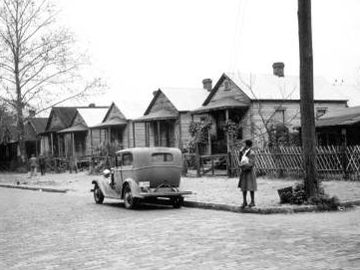 Shotgun homes originated in Haiti, earning their title because of their simple layout, made obvious by their narrow, rectangular shape.

“They have a hallway that runs from the front door to the back door,” explained Ennis Davis, an urban planner and local historian. “If you aimed a shotgun through the front door, down the hallway, and out the back porch, the bullets would emerge without tearing through the rooms on either side.”

Davis said these two- and three-bedroom homes, which range from 300 to 1,000 square feet, were first built by blacks in Port-au-Prince, Haiti’s capital. Once Haitians were transported to the United States via the slave trade in the early 1800s, the inexpensive housing option caught fire in the Big Easy.

“New Orleans was a hub for blacks during the first few decades of the 19th century,” said Davis. “When slaves were brought over from Haiti, they brought their traditions with them.”

Davis added that shotgun homes still make up approximately 15 percent of infrastructure in Port-au-Prince today. Similar to Americans enamored with the tiny house movement, Davis says Haitians quickly learned that shotgun homes were inexpensive to build and even cheaper to maintain.

The style had been quickly adopted in New Orleans to maximize the number of residences that could be built on valuable property. These one-room-wide homes could easily be packed together,

By the end of the Civil War, railroads connected America’s oldest and largest East Coast cities. Davis said these connections formed important networks, which contributed to the spread of shotgun homes, not just in New Orleans, but throughout the South, in places like Duval County.

“Former slaves and their families started moving around a lot,” Davis said. “They didn’t have much, but they took what they had with them, including their ideas.”

Many of these ideas involved architecture and building construction. During the Industrial Revolution, when blacks migrated from rural areas to densely populated urban hubs, space was limited, signaling a need for compact, low-cost housing.

“1865 to 1920 is the dominant era of shotgun home construction in Jacksonville,” Davis said. “Shotgun homes were the preferred housing for working-class families and, in some cases, middle-class families too.”

Though former slaves relished the opportunity to celebrate their African heritage, whites were hesitant to accept the practices of their black counterparts. Davis says shotgun homes were found primarily in black neighborhoods, signaling the racial division that lingered even after President Lincoln’s Emancipation Proclamation.

“Jacksonville was segregated after the Civil War, and while blacks loved to showcase their culture, whites thought it was a turn off,” Davis said. “Shotgun homes were rarely built in white neighborhoods.”

Today, nearly a century later, only a few of these shotguns houses still stand close to Jacksonville’s Downtown.

Joel McEachin, a retired senior historic preservation planner for Jacksonville, saved three homes from demolition in 1999 with the help of Linda Mitchell Harper, founder of Saving Our Unique Landmarks.

Harper had notified McEachin when she learned that developers were attempting to raze the three remaining shotguns on North Lee Street in LaVilla and in response, McEachin alerted the Property Safety Division that the buildings were being considered by the Jacksonville Historic Preservation Commission as local landmarks.  As a result, the demolition did not proceed and  city officials later bought the land, and moved the homes to their current location in the LaVilla neighborhood along North Jefferson and West Church streets.

The trio has yet to be restored, but McEachin is still hopeful that someone will see their worth.

“Officials may not understand the importance of what they have in their possession,” McEachin sighed, flipping through folders brimming with housing records, black-and-white photos and faded newspaper clippings. “Shotgun homes are a part of this city’s rich history, which is why they have to be protected.”

“These homes have contributed immensely to Jacksonville’s development and uniqueness,” McEachin said. “They led to a denser population which resulted in more diverse communities. They’re a part of the Jacksonville brand.”

Davis believes shotgun homes are more than just a brand. They are also an aid to city officials planning to revitalize parts of Jacksonville in the coming years.

“Shotgun homes have the ability to economically enhance our community,” Davis added. “These existing structures can be used to curb the affordable housing problem. They are the original tiny home.”